Oyster reefs are a very important habitat in many estuaries, particularly Galveston Bay. They provide a unique suite of benefits as both a fishery and habitat for other aquatic species. Oyster reefs filter contaminants from the water, protect shorelines, stabilize sediment, and provide food and shelter for over 300 different species. One adult oyster can filter up to 50 gallons of water in one day! Unfortunately, oyster reefs are the most threatened marine habitat worldwide. Studies show that over 85 percent of oyster habitat has been lost on a global scale. In Galveston Bay, over 50 percent of the oyster reefs have been destroyed, primarily due to decades of heavy exploitation coupled with multiple storm events such as Hurricanes Ike and Harvey. Prior to 2008, Galveston Bay yielded nearly 90 percent of the oyster production in Texas. Although oysters are growing well in Galveston Bay, the removal of shells from the bay, due to storm‐driven sedimentation and unsustainable harvesting, has led to a shortage of hard substrate, a key component for sustaining oyster populations. Unlike fishing for trout and red drum, when an oyster is removed from the bay for human consumption, it’s home, and the future homes of other oysters (the shell), is removed as well. 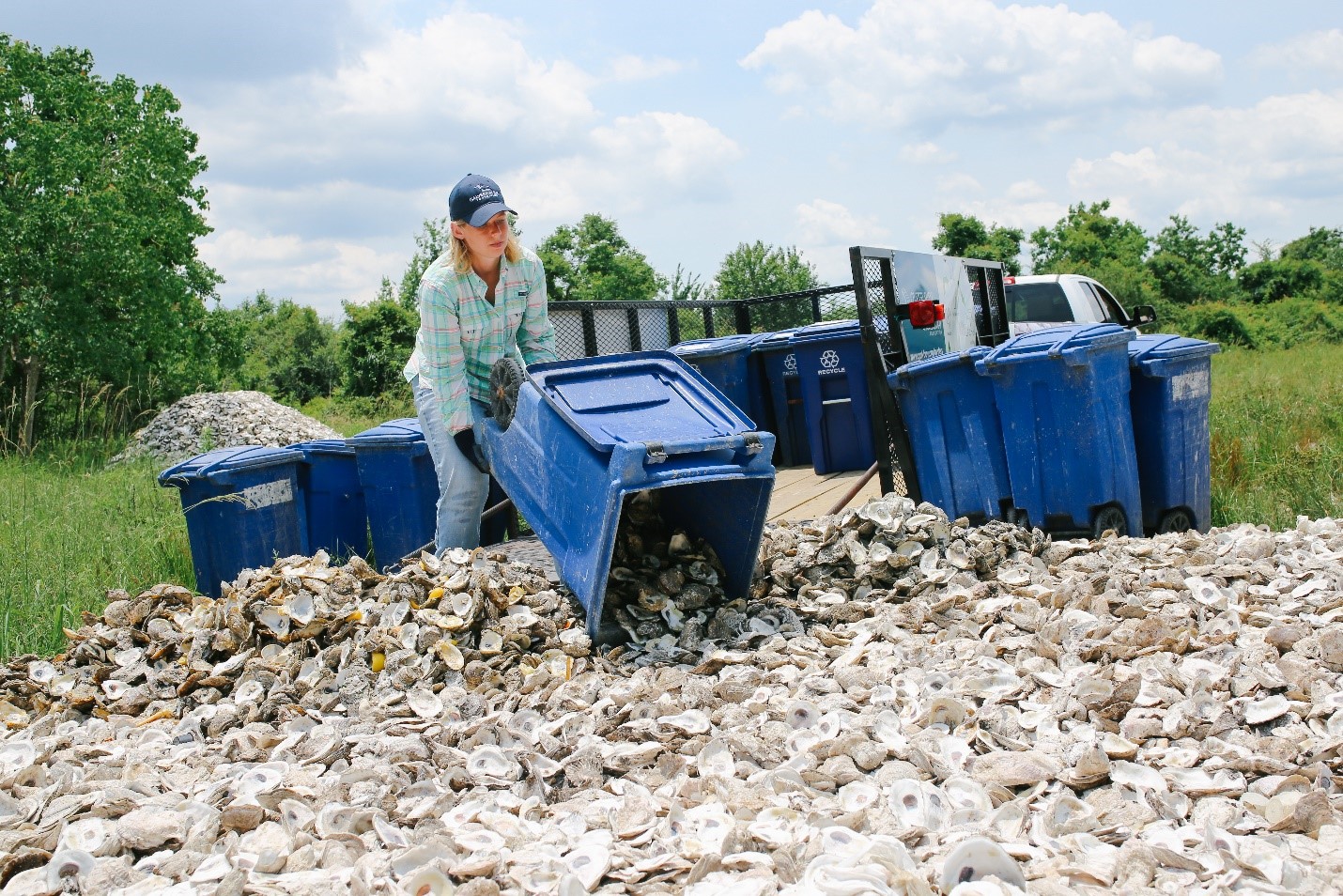 Shannon Batte, GBF’s Oyster Shell Recycling Assistant, placing oyster shell collected from partner restaurants at an upland storage site where the shells are quarantined in preparation for use in reef restoration.

The Galveston Bay Foundation (GBF) reclaims shucked oyster shells from local seafood restaurants through the Oyster Shell Recycling Program for reuse in reef restoration throughout the Galveston Bay estuary. GBF has managed this program since 2011, collecting over 980 tons (1.9 million pounds) of oyster shells to date! The Texas Parks and Wildlife Department (TPWD) captured GBF’s shell recycling efforts in a video that aired on PBS in early 2019: https://youtu.be/cuO6Bx83rDU. Over fifty percent of the shell recycled by GBF has been incorporated in oyster reef restoration projects, like the Sweetwater Lake Oyster Shell Breakwater shown in Figure 2 below. When returned to the bay, the reclaimed shells serve as new oyster habitat. The goal of GBF’s Oyster Shell Recycling Program is to increase the amount of hard substrate in Galveston Bay to help oysters grow, promoting a sustainable oyster population. Without hard substrate on which to attach, oyster larvae have a low survival rate. By encouraging restaurants to recycle their shells, GBF aims to reduce the amount of shells sent to landfills and increase the amount of shells returned to the bay. 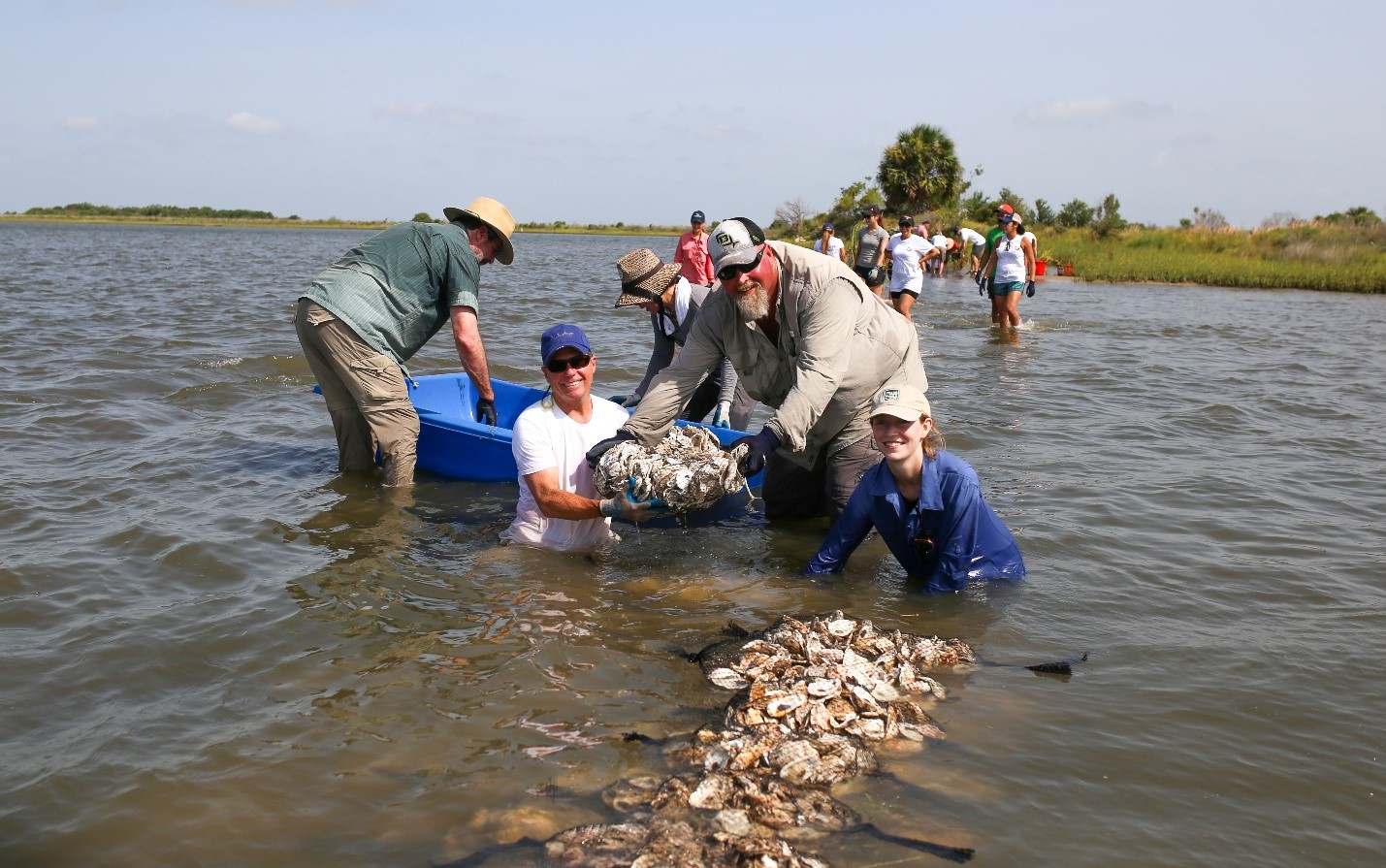 GBF initiated the Oyster Shell Recycling Program with one restaurant in the Clear Lake area, and one shell storage site. With grant funding and support from private foundations and corporations, the Program has progressed through the Pilot and Expansion Phases, resulting in 12 restaurant partnerships and four shell storage sites over the last eight years. Within the first two years of operations, the amount of shells recycled annually increased by 200 percent. Since that time, GBF has streamlined the shell recycling operations and developed long‐lasting relationships with restaurants throughout the Clear Lake area and on Galveston Island. As a result, GBF collects an average of 100 tons of oyster shell a year, thus allowing for more and larger reef restoration efforts like the Dickinson Bay Oyster Reef Restoration Project featured in the following video: https://youtu.be/vtBCbp76W58. 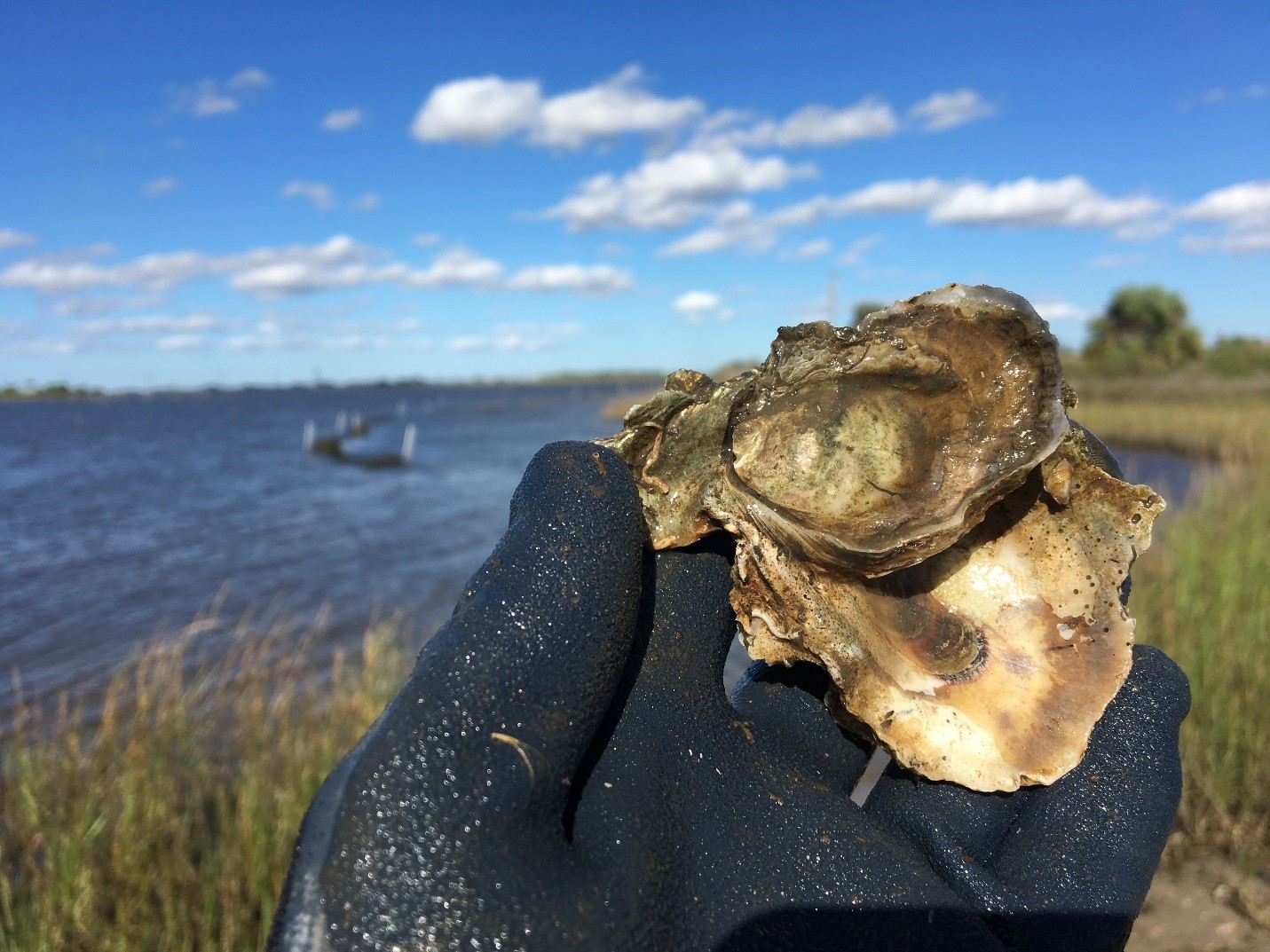 A young, live oyster attached to a recycled oyster shell at GBF’s Sweetwater Preserve where recycled shells are being returned to the bay to create a shoreline protection structure and increase oyster habitat.

Now, the Foundation is working to further expand its shell recycling operations into Houston within the inner-loop. The number and density of seafood restaurants serving oysters in the Houston metroplex far outweigh those in Clear Lake area as well as Galveston Island where GBF’s operations are currently focused.

How can you help?

Come to the Inaugural Houston Oyster Festival on April 4th, 2020 to help kick-start the program expansion! Up to 20 restaurants will be present at this event to provide samples of their signature oyster dishes. A raw bar will be available to anyone interested in trying oysters on the half shell and a VIP lounge will provide pairings of oysters and cocktails. GBF will also include an educational component at the Festival and involve all attendees in the shell recycling process.

All proceeds will support GBF’s oyster shell recycling operations and help facilitate the expansion into Houston. The restaurants participating in this event will be given the first opportunity to receive weekly shell recycling services once GBF is able to expand to Houston. And of course, each shell collected at the Festival will be returned to Galveston Bay! 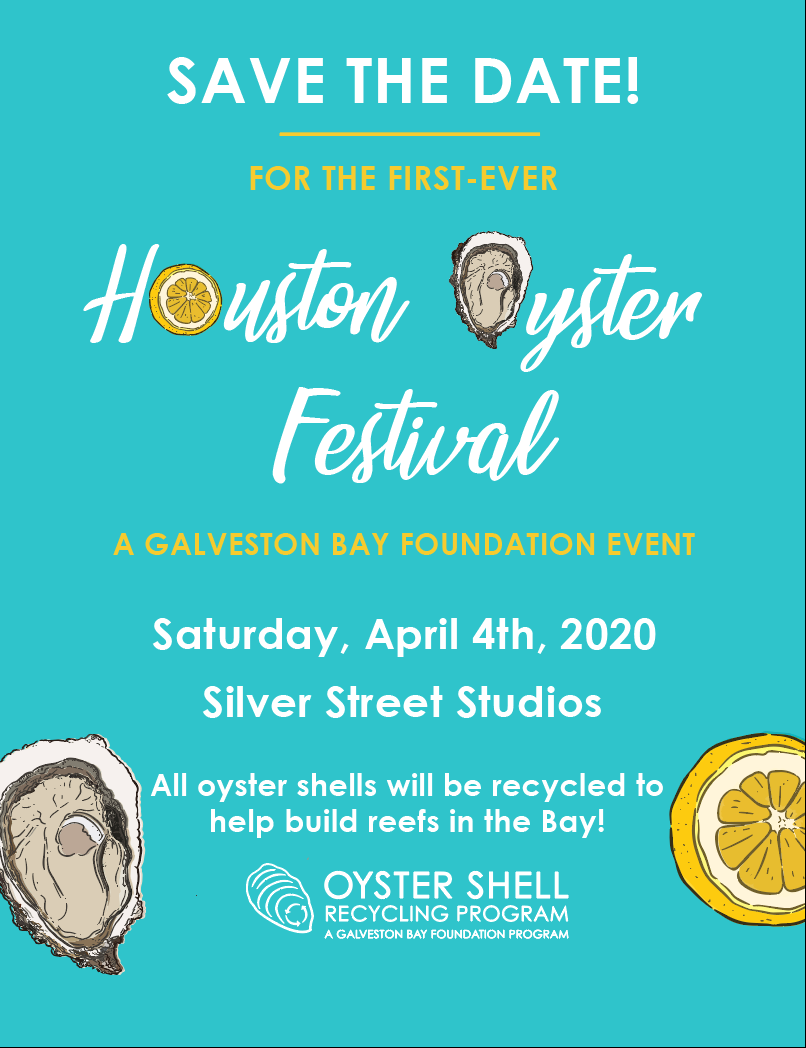