Vanessa Mintzer of the Galveston Bay Foundation and Kristi Fazioli from the Environmental Institute of Houston (at the University of Houston at Clear Lake) are studying dolphins in upper Galveston Bay.

The Galveston Bay Dolphin Research and Conservation Program (GDRCP) was formed in 2014 as a partnership between the Galveston Bay Foundation (GBF) and the Environmental Institute of Houston at the University of Houston-Clear Lake (EIH-UHCL).

Bottlenose dolphins (Tursiops truncatus) utilize a variety of habitats within Galveston Bay year-round. This is the only species of marine mammal you will find regularly inhabiting the inner bays and estuaries of the Texas coast. Our research focuses on dolphins in upper Galveston Bay where there is typically an influx of dolphins during the warmer months (April-Oct).  Many dolphins appear to move south (closer to Galveston) during the cooler months, while some may leave the Bay all together.   Our ongoing studies suggest that there are several groups of dolphins in upper Galveston Bay: year-round residents, returning seasonal residents (usually visit in the summer), temporary residents (that visit the upper Bay for consecutive months or seasons and then leave), and transients (infrequent visitors).

A ride on the Galveston-Port Bolivar Ferry is a great way to see dolphins!

How are dolphins connected to Galveston Bay and its food web?

Bottlenose dolphins are apex predators, meaning that they are at the top of the estuarine food chain.  They feed on a variety of fish, crustaceans and squid. Sherah Loe, a graduate student with College of Science and Engineering at UHCL, has a study under way to learn more about foraging ecology and the specific foods that are important to dolphins in Galveston Bay. It is likely that their diet includes sand sea trout, Atlantic croaker, mullet, silver perch, and spot. They also seem to enjoy the flounder run as much as our local fishermen do! 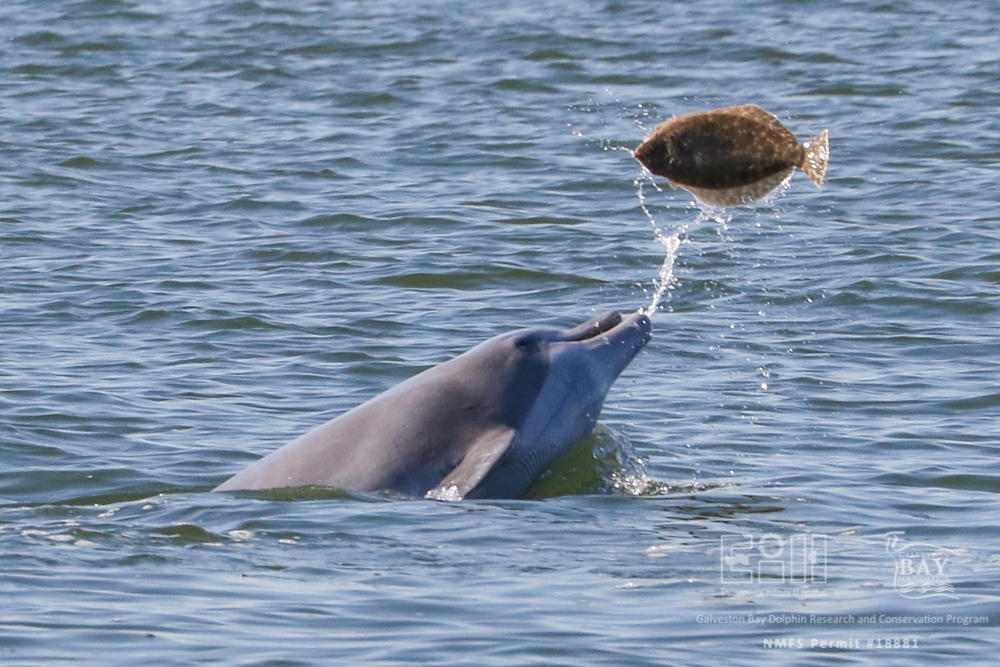 The GDRCP researchers often see dolphins interacting with vessels.  Bow-riding on ships, and patrolling shrimp trawlers as a foraging strategy, are common interactions. We are working to learn more about what habitats within Galveston Bay are most important for critical dolphin behaviors such as raising young, socializing, resting and feeding.

What conditions are important for healthy dolphins in Galveston Bay?

Because dolphins are large, highly mobile, long-lived mammals at the top of the food chain, all the components that go into having a healthy bay also are important to having a healthy dolphin population.  Many of these dolphins will spend their entire life depending on the resources that Galveston Bay has to offer, and this is what makes them a great sentinel for Galveston Bay.  Living in an inshore estuary, especially a busy industrial one, introduces many risks to a dolphin population.  Habitat destruction, toxic pollutants, competition for prey, poor water quality, ship traffic and other human interactions all pose challenges to maintaining a healthy environment for dolphins.  Fortunately, bottlenose dolphins are a very adaptable species, and if we work to mitigate these risks and keep the bay healthy for all the many species that depend on it, then it can be a good place for dolphins to live as well, even alongside busy human activities.

During the few years that the GDRCP has been studying the Upper Galveston Bay dolphin population, tracking of several individuals through time has shown that severe skin lesions develop after heavy rain events (corresponding with decreases in salinity in the Bay).  This correlation was evident after Hurricane Harvey, when almost all dolphins found in the upper Bay during the weeks immediately following the storm, developed lesions.  Moreover, changes in dolphin distribution were evident for weeks following the storm, as it appeared dolphins moved south and into the deeper Houston Ship Channel in search of higher salinity.  A decrease in the number of mother/calf pairs in the in the shallow areas of the upper bay study area, compared to what is expected for this time of year, has also been evident for the weeks following the storm. Some dolphins that stayed in the area appeared to be in poor body condition, potentially unable to find enough food for a period of time during and immediately following the storm.  While these are some of the more visible effects, we are also concerned about unseen threats such as toxic runoff, including dioxins from the San Jacinto waste pits just upstream from where dolphins are feeding.  Pollutants such as these could cause long-term harm to the population especially when combined with multiple stressors from low salinity and changes to prey and habitat. The GDRCP recently received emergency grants from the Gulf of Mexico Alliance and SeaWorld Busch Gardens to conduct research on these impacts for the year following Harvey. 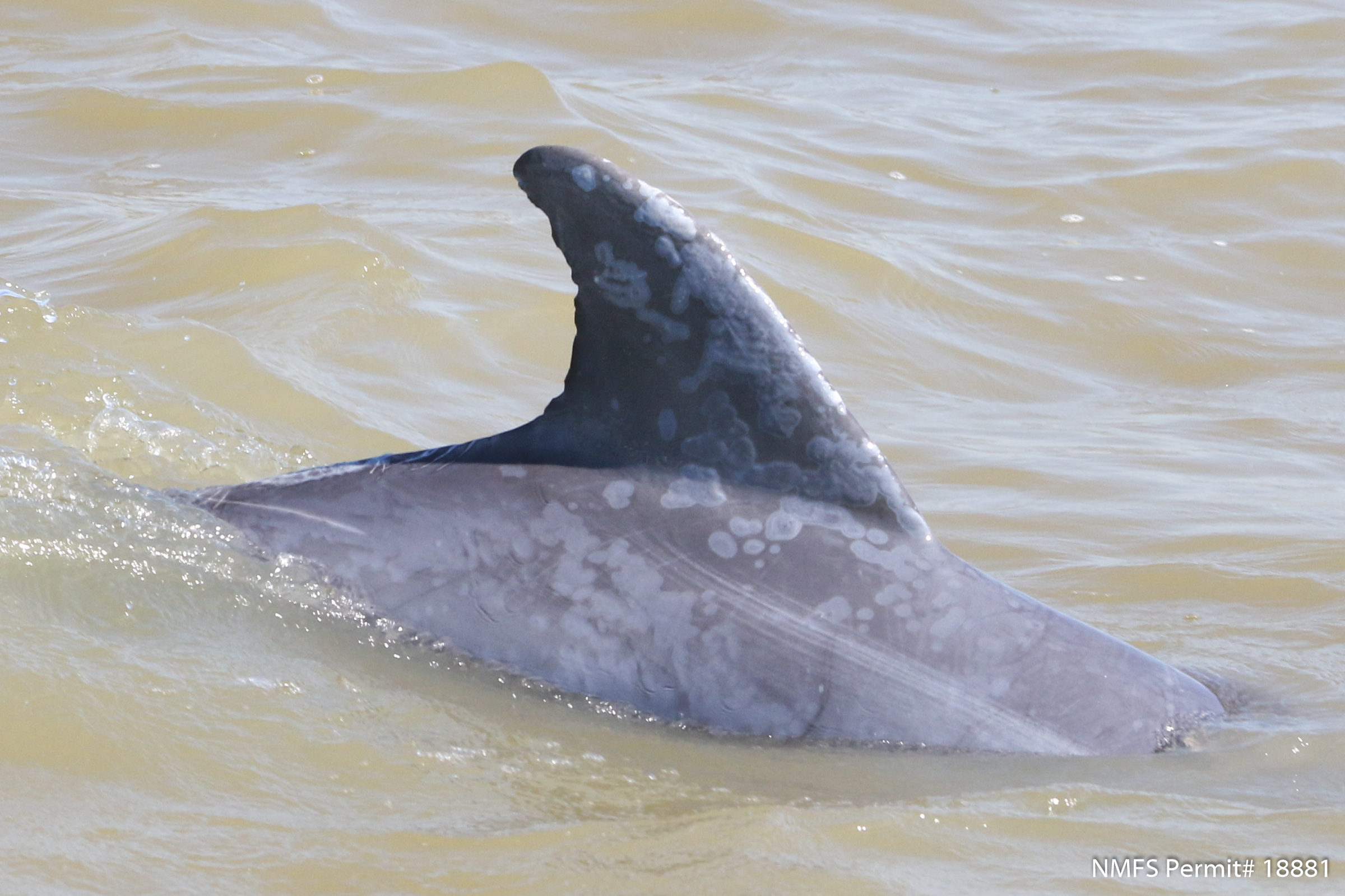 What can we do to help Galveston Bay’s dolphins?

As researchers, the most important thing is to monitor the population to better understand how large freshwater influxes and other risk factors in Galveston Bay influence dolphin health, distribution, and habitat use. This knowledge is very important for making good management decisions and responding to environmental disturbances in the future.  Getting support for these efforts is a top priority.

For the community as whole, first, we can take care of the Bay, and maintain water quality standards that allow for a healthy dolphin population. Second, when you’re boating, keep a safe distance of 50 yards from any dolphin and limit viewing time to 30 minutes.  Be extra cautious with mother and calf pairs. Never feed or touch dolphins.  Third, teach others about what you know about Galveston Bay dolphins and the regulations that are in place to protect them. Finally, if you see an injured or stranded dolphin, please call the Texas Marine Mammal Stranding Network 1-800-9-MAMMAL.